Standing desks are very popular nowadays. Users are then asking, “when was standing desk created”? The truth is, these desks and their health benefits are nothing new. They have been around way before you were born.

The famous painter and inventor Leonardo da Vinci is probably the earliest known user of the standing desk. That means it was already around during the 1400s. That is more than half a century of history right there!

Standing desks have been around for a long time for sure. Now, wouldn’t it be interesting to learn how a piece of office furniture impacted the past and created our present?

Read on to find out more about these standing desks and some surprising facts about them.

Recent studies warn that the time you spend sitting down correlates with the risk for heart disease and premature death. Interestingly, those worries go back centuries.

In 1797, for instance, English minister Job Orton advised that a sedentary life could be detrimental. He said that getting a standing desk could help keep your body upright when reading and writing.

Samuel-Auguste Tissot, a Swiss physician, also identified some ailments related to sitting too much. He wrote that desk-bound intellectuals suffered from engorgement of their innards and poor circulation.

Tissot then suggested playing badminton, tennis and croquet to fight these effects. But others promoted standing work.

In the 1800s, office life involved much less sitting than today. Nearly half of all the writing done for business was at standing desks, and investors of this period filed patents for adjustable bureaus. However, by the mid-1900s, the practice became rare and seemed eccentric.

Then, in the mid-1950s, George Plimpton noted how Ernest Hemingway stood and wrote with his typewriter on a bookcase despite having a desk.

Today, modern standing desks are adjustable, with electric-powered, spring-loaded or counterbalanced designs. They are also becoming popular again, with some people advocating their use in the office. 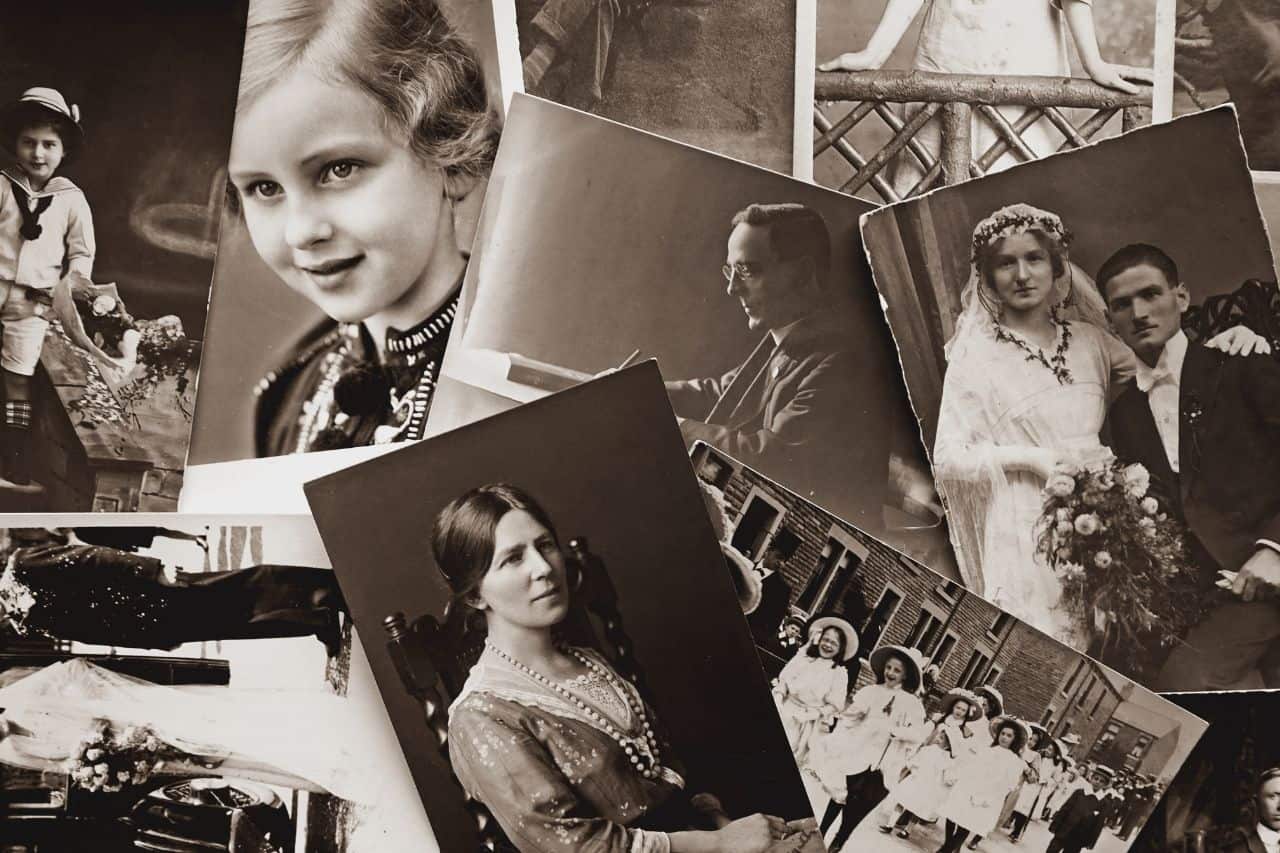 People have been curious, keying in online search phrases like “who designed standing desk”. Although there is no clear answer to this question, some claim that Leonardo da Vinci used a standing desk during his time.

Let’s take a peek into history and check out this list of notable people that have used standing desks.

Ideas of the philosopher, poet and cultural critic Friedrich Nietzsche still influence modern intellectual thought. Aside from standing to work, he believed that working while sitting down was useless.

Prolific writer Charles Dickens had so many bestselling books to his name. Most people consider him the greatest novelist of the Victorian period. Dickens is also on many people’s list of the greatest writers in history.

His famous novel David Copperfield shows his astounding writing skills, with its “gloriously vivid” characters. When novelist Elizabeth Gaskell visited his study, she noted that Dickens worked at a standing desk.

Virginia Woolf, one of the best-known intellectuals and modernist writers of the 1900s, is known for her books Orlando, Mrs Dalloway and To the Lighthouse, and A Room of One’s Own, her book-length essay.

According to her nephew and biographer, she had a standing desk roughly three and a half feet high with a sloping top.

A Pulitzer and Nobel Prize winner, Ernest Hemingway is known for using a typewriter on a standing desk. His editor at Scribner’s gave Hemingway the idea. Because of a leg injury from World War I, Hemingway almost always did his work standing.

Aside from writing about Hemingway standing to work, George Plimpton also wrote that Hemingway’s bedroom in Cuba had cluttered bookcases and a “work desk”. Interestingly, Hemingway is also one of the famous people with cluttered desks.

In the 1940s, former British Prime Minister Winston Churchill led his country to win over the Nazis in the Second World War. In 1953, he was awarded the Nobel Prize in Literature for his work.

Churchill has a famous photo of him at a standing desk, mulling over some documents as he chewed a cigar. Some consider it a surprising history of standing desks. He has several famous speeches that still echoes to this day.

Former U.S. Secretary of Defense Donald Rumsfeld used a standing desk even before it was widely available, according to a Washington Post article in 1988.

He first worked while standing in Brussels in 1973. At that time, he was the U.S. ambassador to NATO.

He did not stop using a standing desk. He even said this about it: “I can’t claim my brain worked better, but if you feel good, you do tend to work better”.

United States Poet Laureate Rita Dove is another Pulitzer Prize winner who used a standing desk. There is even a photo of her in the book The Writer’s Desk by Jill Krementz, where Dove is at her standing desk.

In case you did not know, Stan Lee is the creator of “X-Men”, “The Fantastic Four” and “Spiderman”. The former Marvel Comics president also has a photo of himself using a standing desk.

The photo’s caption can give us an idea of what he thinks of standing desks: “Always wrote standing up — good for the figure — and always faced the sun — good for the suntan”!

Tim Cook once said that “sitting is the new cancer”. And so, it’s no longer surprising that the CEO of Apple opts for a standing desk. He even disclosed that everyone in Apple Park, the company’s headquarters, gets one! 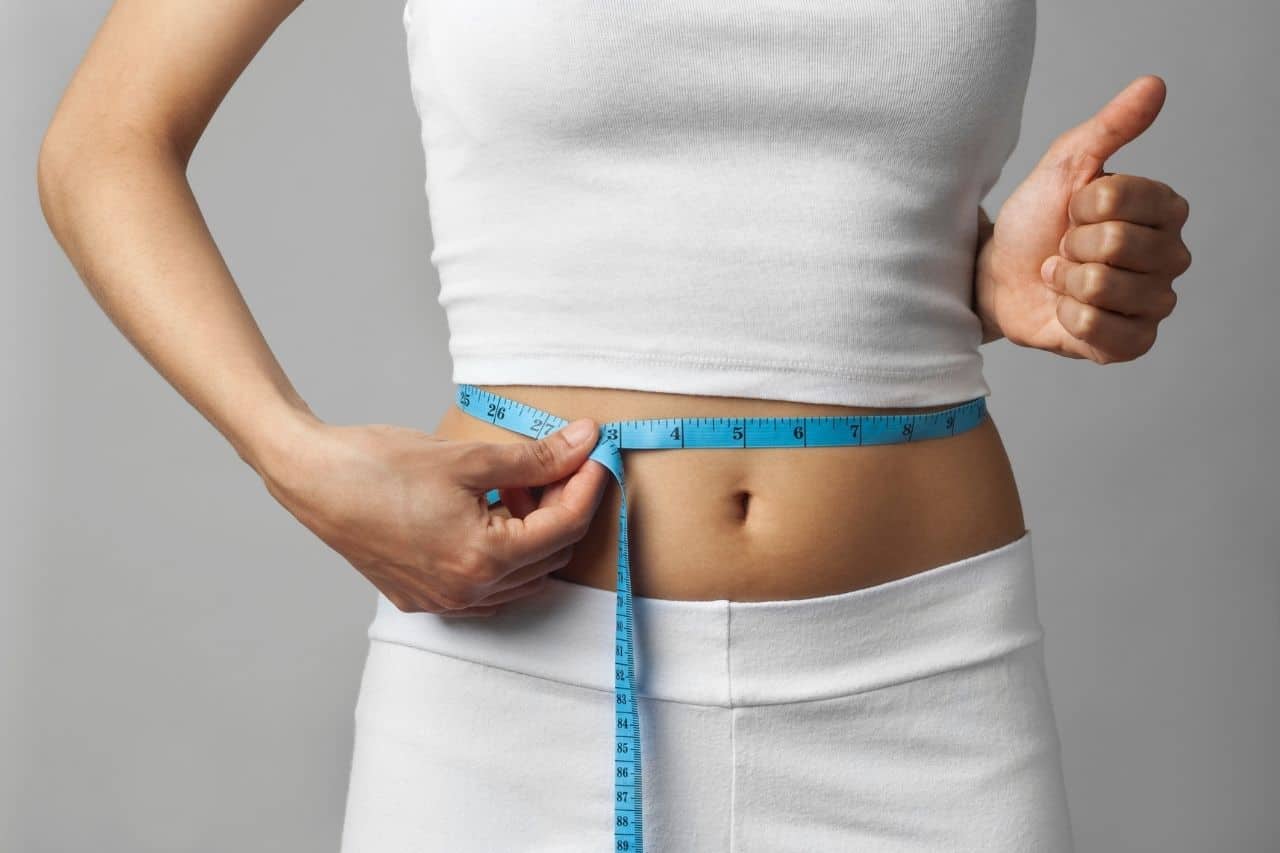 Here are some of them.

You can burn calories quickly by exercising. But standing instead of sitting is also better for your health. You burn extra calories when you stand up compared with doing sedentary work.

Also, prolonged sedentary time can significantly increase your risk of heart disease by up to 147%.

Standing after meals reduces blood sugar spikes. So, if you work using a standing desk, it can help you control your blood sugar levels.

Several studies show that using a standing desk lessens back pain. One research, for instance, concluded that sit-stand workstations reduce low back discomfort among workers.

In one study, participants used standing desks for seven weeks. They reported having less fatigue and stress.

With these benefits, it is not surprising that more and more people choose to stand while working. And if you are thinking of getting yourself a standing desk, make sure to pick one that suits your needs.

You might want to consider getting a matching standing desk chair, too!

Who designed the standing desk or when was it created may be unknown, but its history is undoubtedly long. Many people have known and used it for centuries, including famous figures Da Vinci and Tim Cook.

Its use will likely continue for many years to come because health concerns will always be around. People will always try to find ways to improve their life and well-being.

Using a standing desk may be an effective solution to limit our sitting time at work. But that does not mean it is good to stand the whole time either.

So, see to it that you take regular breaks. Move around and stretch to get your blood flowing. 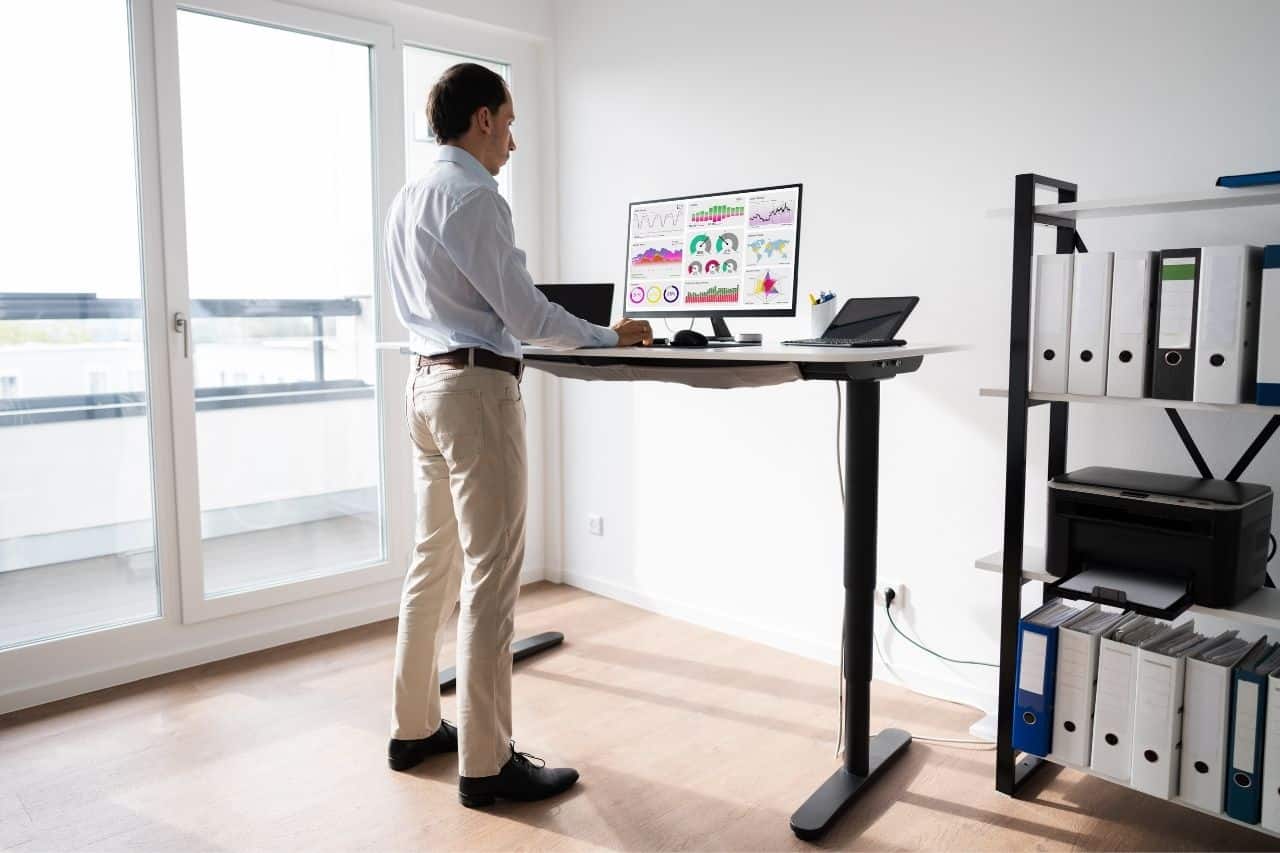 1. How long should you stand when using a standing desk?

You can spend an hour using a standing desk. It is best if you alternate between standing up and sitting down. Also, make sure that you take regular breaks for moving and stretching.

2. How much should you spend on a standing desk?

There are several types of standing desks. Prices mainly depend on construction and operation (manual or motorised). However, you can get a reasonably-priced manual standing desk for $250-300 and a fully electric one for about $500-600.

3. What is the difference between a sit-stand desk converter and a full standing desk?

A fully standing desk is an adjustable desk that allows you to stand while working. On the other hand, a sit-stand desk converter turns a flat surface into a standing desk. That means you can use a regular table as a standing desk with this device.